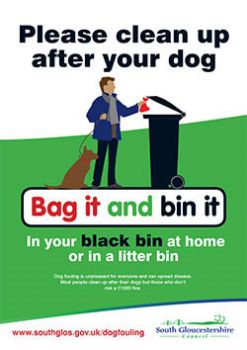 Dog owners in South Gloucestershire are being reminded to dispose of their dog’s waste responsibly.

The ‘Bag it and bin it’ message aims to remind dog owners that they can dispose of dog waste both in their black household waste bins as well as in any available litter bin – and that waste should never be left behind.

Chair of the council’s Communities Committee Cllr Claire Young said: “Lots of our residents enjoy keeping a dog and most of them accept that responsible ownership includes the chore of cleaning up after them.

“However, we’ve all seen occasions when people either don’t clear up at all or bag the waste but leave it hanging on a nearby fence or hedge.

“As well as being unsightly this is a nuisance for other residents and can be a significant health hazard because dog waste can carry diseases including Toxocariasis, which can lead to serious illness, including blindness.

“So, this campaign aims to remind people that they must clear up after their dog, ideally by taking waste home for disposal in their black bin or by disposing of it in any nearby litter bin.”

As part of the campaign, ‘dual use’ plaques will soon be placed on South Gloucestershire litter bins to remind dog owners that all litter bins can be used for dog waste.

Changes to national legislation in recent years dispensed with the need to separate dog waste from other forms of waste. Some parishes within South Gloucestershire intend to continue providing dog waste bins, but others will be dispensing with dedicated bins altogether in coming months.

Posters have been placed in the district’s parks to highlight the message that litter bins and black bins can be used for dog waste.

Anybody walking a dog – whether it is theirs or not – is legally required to clean up after them and failure to do so can lead to a fixed penalty notice and possible prosecution.

Further information on dog waste disposal in South Gloucestershire is available from www.southglos.gov.uk/dogfouling